Click here to see collectors guide..
Klik her for at se samlers guide.. 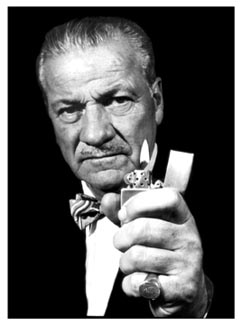 Zippo was founded in Bradford, Pennsylvania in 1932 by George G. Blaisdell. He was born on June 5, 1895, in Bradford. On the surface of it, young George Blaisdell hardly seemed like someone who would find success in the brutal years of the Depression. He had very little formal education. He hated school; walked out of fifth grade and told his family he wasn’t going back.

His father bundled him off to a military academy, but young George Blaisdell lasted only two years there before he was summarily dismissed. His father put him to work in the family business – the Blaisdell Machinery Company – where he learned metal work, a skill that would come in handy in the germination stages of the Zippo lighter nearly thirty years later.

After World War I, he took over the family business, then sold the machinery company in 1920 and put the money in oil. The 20s roared – then stopped. Oil plunged – along with just about everything else – into the Great Depression. In Bradford, PA, where years of oil-boom business seemed invulnerable, the effects of the Depression were deeply felt.

Sarah Dorn provides this account of her father in the early days of Zippo: “My father hated the oil business. He wasn’t particularly good at it; in fact, he was a man for whom the boom was bust. He didn’t have the temperament for it. The one thing he did know in the early ‘30s was that he needed to do something, because those days were tough. There wasn’t a lot of money lying about then, but he went to everybody to get the money to launch Zippo Manufacturing Company. Nobody had any faith in it. It seemed like a foolish, harebrained idea. And it was. Imagine: manufacturing and marketing a lighter for $1.95 when that amount of money fed a family. What kept him going? I think whatever it was, it was tinged with desperation. He had to make this work. For him and his family, as they say now, there was no Plan B.”

No other event in history increased the popularity of Zippo lighters more than World War II.
From 1943 through the end of WWII, Zippo’s entire production was allocated to the armed forces.
The company archives are filled with letters detailing the services a Zippo lighter was called to perform: heating rations in a helmet, lighting campfires, sparking fuses for explosives, hammering nails and even signaling to fellow soldiers with the famous Zippo click.
On several occasions, a Zippo lighter in a shirt or pants pocket even saved a life by deflecting bullets.
Because of a shortage of raw materials, WWII-era Zippo lighters were made of steel rather than brass, and dipped in a black protective coating to prevent rusting.
Today collectors refer to these rare models as black crackle lighters